J.D. Presents a Selection of Classical Islamic Poems at the Burns Club of Atlanta 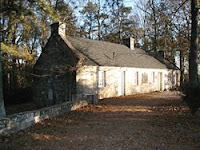 This past Wednesday, I had the opportunity to speak before the Burns Club of Atlanta, a fantastic literary of social organization of which I am proud to be a part. I presented a program that looked at the classical period of Islamic poetry, using a small handful of notable Arab and Persian poets to explore some common themes of the genre: from uniquely Middle Eastern devotional works to familiar romantic styles, tavern poems, and satires.

My program aimed to demystify Islamic culture through verse, the most celebrated art form in the Islamic world. Hopefully, by keeping the presentation light, focusing on the poetry rather than the sometimes-touchy political issues associated with the Islamic world, this poetry served as a good back door to introducing Islamic culture to the Burns Club's already well-versed audience.

I got interested in the genre while studying Arabic at UGA while working on my MA in history. In particular, through my first exposure to Arabic poetry: a boastful poem by al-Mutanabbi which reads (in Arabic, right-to-left; and in corresponding English, left-to-right):

In preparing this presentation, I was also motivated by a Martin Agency campaign I came across about two years ago (and about which I have previously written):

While my performance of selected classical Islamic poem likely fell well short of that expected of a traditional rawis, I hope it helped to broaden the perspective club members have of Islamic literature. More than anything, looking at the art of a culture in this way – stripped of alien language and foreign imagery – reveals the true, shared humanity in each line. So often, we see only the adversarial side of another culture – that which most opposes out own sensibilities – instead of the common threads of love, lust, laughter, and truth. Poetry provides a special window in this example, because of the literary focus of the Burns Club and the importance of poetry in the Middle East.

As if to drive home the point of this presentation, I was alerted shortly after the meeting to the recent death of the modern Palestinian poet Mahmoud Darwish. His funeral, in the West Bank city of Ramallah, was reported on by the BBC and, among other things, serves as a poignant reminder of the lasting importance of poetry in Islamic culture – Arabic culture, in particular: "Thousands would flock to his recitals. His poems were transformed into popular songs and used in political speeches, and the words he wrote now form part of Palestinian daily life, our correspondent says."

Three books that helped me assemble the presentation might be of interest to others: Coleman Barks' many books about the poet Rumi, Bernard Lewis' Music of a Distant Drum, and, of course, the Rubaiyat of Omar Khayyam.

Enjoy a few of the humorous samples from the presentation:

I asked her for a kiss and obtained it
after refusal, and much effort.
By God, I said, my tormentress, be generous,
give me another and content me.
She smiled and cited a proverb,
known to the Persians, and true:
Never give anything to a child
who petulantly asks for another.
-Abu Nuwas

Though my master speaks ill of me
I shall not mar my face with pain.
I shall speak nothing but good of him
so that we may both be see as liars.
-Kamaluddin Isma’il Isfahani

Lord, of your grace all that I hope is this–
keep the realm of my pleasure prosperous
avert me from the calamity of chastity
and keep far from me the doom or repentance.
-Ubayd-i Zakani
Posted by J.D. at 1:33 PM No comments: