J.D. Presents a Selection of Classical Islamic Poems at the Gate City Lodge 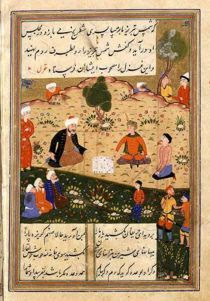 This past Tuesday, February 24, I was thrilled to have opportunity to, once again, give my presentation about Classical Islamic Poetry. Beaux Pettys, a fellow member of the Burns Club of Atlanta, saw my presentation back in August and invited me to speak on the same subject in front of the Gate City II masonic lodge in downtown Atlanta.

As at the Burns Club, my program looked at the classical period of Islamic poetry, using a small handful of notable Arab and Persian poets to explore the most common themes of the genre: from uniquely Middle Eastern devotional works to familiar romantic styles, tavern poems, and satires. This program aimed to demystify an often-adversarial culture through verse, the most celebrated art form in the Islamic world, and provide historical perspective, demonstrate Islam's impact on Western literature, and illustrate the shared human issues poets of both the Middle East and West addressed.

I got interested in the genre while studying Arabic at UGA while working on my MA in history. But rather than deliver an academic lecture, this presentation is meant to be light, focusing on the poetry rather than the sometimes-touchy issues associated with Islam and the current conflict with the West. But it is my hope that the poetry of the classical period can serve as a good backdoor to help humanize and understand Islamic culture.

All that said, what would a good post about poetry be without a poem or two.

One of my favorites, yet one I did not find space for in the presentation, is a poem of Rumi's that I feel is very germaine to the masonic perspective on God and religion. In the 13th century AD, he wrote:

I searched for God among the Christians and on the Cross and therein I found Him not.
I went into the ancient temples of idolatry; no trace of Him was there.
I entered the mountain cave of Hira and then went as far as Qandhar but God I found not.
…
Then I directed my search to the Kaaba, the resort of old and young; God was not there even.
Turning to philosophy I inquired about him from ibn Sina but found Him not within his range.
I fared then to the scene of the Prophet's experience of a great divine manifestation only a 'two bow-lengths' distance from him' but God was not there even in that exalted court.
Finally, I looked into my own heart and there I saw Him; He was nowhere else.
-Rumi

But as I often prefer to wax comedic, I am drawn to the more humorous or bawdy poems of the period. Some of these I've quoted before. But the following poem, by a caliph no less, always seems to surprise folks with it unapologetic, risque tone.

She rose to meet me with a kiss and embraced me
her limbs full, her mouth fragrant like musk.
“Come in, no one will know,
I am your ransom against suffering.”
And so we lay that night, sleepless on our beds,
in the heat of passion she clasped me and I clasped her,
until the two threads appeared and I said to her,
“It is time to part,” and grief almost overcame her.
Then I left her and no one knew of us.
May God reward her for her good deed.
-Al-Walid II

And, as before, my favorite of the series:
Lord, of your grace all that I hope is this–
keep the realm of my pleasure prosperous
avert me from the calamity of chastity
and keep far from me the doom of repentance.
-Ubayd-i Zakani
Posted by J.D. at 8:33 AM 1 comment: