The Iran Hostage Crisis and the Media, 30 Years Later

It's been over two years since I slipped out of grad school after having written my masters' thesis, Shooting the Ayatollah. But on this anniversary of the seizure of the embassy, I can't help but offer up this reminder and shameless plug.

Thirty years ago today, a group calling themselves the Muslim Students Following the Imam's Line captured the US embassy in Tehran. For the 61 Americans working caught on the embassy grounds, the charge d'affairs and his two aides held at the Foreign Ministry across town, and six other Americans hiding in the Canadian and Swedish embassies, their hostage crisis had begun. A 444-day ordeal defined by isolation and mistreatment lay ahead for most of the hostages. A nightmare of torture and abuse lay ahead for an unfortunate few.

But this is not how the Iran hostage crisis began for most Americans. As the students broke into the embassy buildings, and as the hostages were blindfolded and paraded across the grounds, camera viewfinders focused on them. Photojournalists covering the demonstration, or alerted to the seizure of the embassy, rushed to the scene, snapping off iconic images of William Belk, a towering communications and records officer, blindfolded in front of a small group of marine and diplomat hostages. Film crews recorded footage of Jerry Meile, a communications officer hiding in the interior vault, led blindfolded from the chancery between grim-faced militants. For most Americans the hostage crisis began 11.5 hours after the surrender of the chancery when CBS's Bob Schieffer, NBC's Jessica Savitch and Dick Schaap, and ABC's Sam Donaldson began another 444-day ordeal – an ordeal defined by images of angry Iranian demonstrators, a scowling ayatollah, a powerless president, and the ordinary faces of Americans held hostage half a world away.

Shooting the Ayatollah: Photojournalism, the Press, the Foreign Policy Public, and the Iran Hostage Crisis quantifies the volume, type, and tone of images used by the mass-market newsweeklies – Newsweek, Time, and U.S.News and World Report – to depict Iran and the Iran hostage crisis in an attempt to characterize related media coverage. In four chapters, this study's quantitative approach describes the entire life cycle of hostage crisis media – from its creation in Tehran and Washington by news service reporters and Iranian photojournalists, its communication on the pages of the American news magazines, a statistical examination of news media consumption by various strata of American society, and a comparison of the American press and its Arab analogue. This thesis also tests a number of core assumptions about hostage crisis media coverage that dominated the contemporary press and continue to linger in the current historiography, providing a new, more accurate image of the crisis's cultural impact. 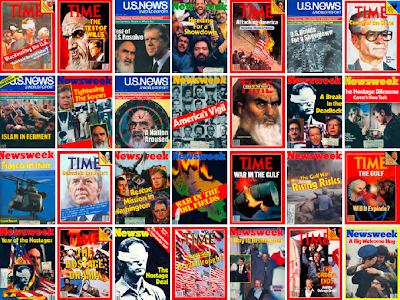 Looking back on when I wrote this thesis—Fall 2006 through Spring 2007—I am reminded that it was the result of three happy accidents: The first is my background in graphic design and marketing – experience that taught me the invaluable vocabulary of imagery, content creation, and marketing statistics as well as the means to render that data in a meaningful graphic way. The second and third are my accidental discovery of the hostage diary of Robert Ode in the Carter Presidential library archives and my unplanned meeting of former hostage Chuck Scott at a Burns Club of Atlanta dinner. 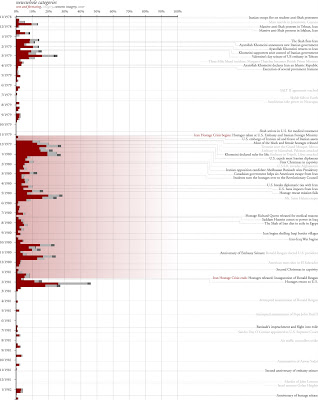 Of course, the story's not over. More research can be done, certainly, on the effects the coverage of the crisis had on America's perception of Iran. Even relating to the work in Shooting the Ayatollah, new content quantification techniques have become popular, such as tag clouds, which might help reveal more of the truth behind the story. And, of course, there's the coverage since the crisis, often as vitriolic as that during the crisis—perhaps more so when concerning Persia's most recent leader and the radical transformation of the Iranian-American story. Why, even today, as students gathered to protest outside the defunct US embassy in Iran, their chants were transformed from "Death to Carter" to "Death to the Dictator"—a reference to the current ayatollah.

Read Shooting the Ayatollah: Photojournalism, the Press, the Foreign Policy Public, and the Iran Hostage Crisis
Posted by J.D. at 7:31 AM