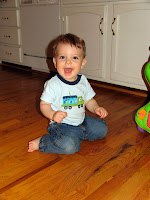 Happy Jackiversary! Just 365 days ago, at 6.37pm on March 31, 2008, we met Jack for the first time—a few of us in person, a great many more online. It's hard to believe it's been a whole year! As a couple long known for discomfort around children of all ages, we're happy to say that the past year has been a blast and that—poop-related incidents aside—it's been better than either of us could've imagined.

As the absence of updates for the last few months should suggest, the kid and company have been busy. There was the pilgrimage to Athens for JD's birthday, some early springtime trips to Riverside park (with the necessary rolling around on the grass, swinging, and wide-mouthed staring), a trip to the High, and Noah's baptism. But the biggest events of the last three months, were, hands down, Jack's first steps with a walker and his first haircut. 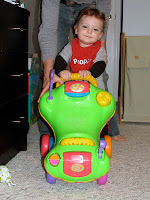 In just the last week, Jack went from ignoring his walker, which sat idle by his crib for months, to strutting his stuff around the downstairs hardwoods, controlling his speed, turning on the go, laughing uncontrollably, and cruising for girlies. We're thrilled and impressed by his rapid progress behind the walker! Our only fear is that he'll soon realize that he doesn't need his walker and that he'll take off at a full run before we've had a chance to warm up. 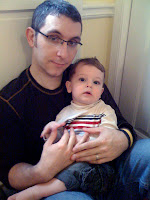 Over the course of the past year, we've seen Jack's head of hair transform from a newborn tangle, to a killer mohawk, to a notorious Trumpesque combover. Then the weather changed, the humidity rose, and that sandy blond mop of his got curly and out of control! The time had come for a haircut. And the kid was fantastic—he sat happily on his booster seat, flirting with all the ladies in the salon, and let Ann's stylist Lynn work her magic. So next time you see the 'lil sir, be sure to tell him how great his first do looks.

But it hasn't all been trips, infant mobility, and visits to the salon. Jack's had a bunch of other firsts to round out his first year:
And for those of you keeping score at home, as of his 12-month checkup, the 'lil sir weighs in at 23lb 2oz (54%) and measures 31.75in (93%). And that big old brain of his? Well, his head circumference came in at 19in (92%). So he's long and lean and shaped like a lollipop. 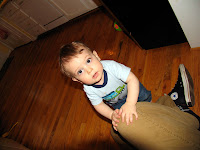 For his birthday, JD was going to take the kid out for a bike ride in his new trailer or to the golf tourney up the street. Sadly, the weather didn't cooperate with that plan. So, instead, Jack, JJ and JD went to Phipps (where Jack flirted with some lovely ladies at Tiffany's and Frontgate) and ToysRUs (where the kid cleaned up with 1-year-old toys). Now we've just got to get ready for a proper First Jackiversary shindig this weekend.

Til then, enjoy a whole mess of pics from the last three months.

JD and Jack at Riverside Park in February 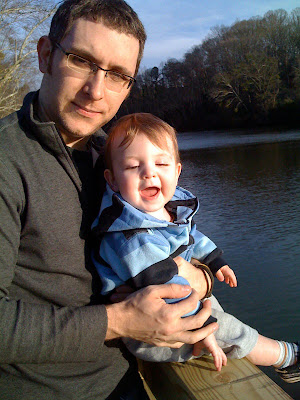 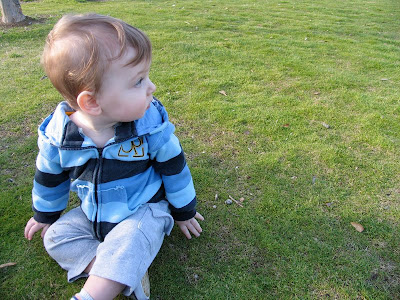 Ann and Jack at Riverside Park 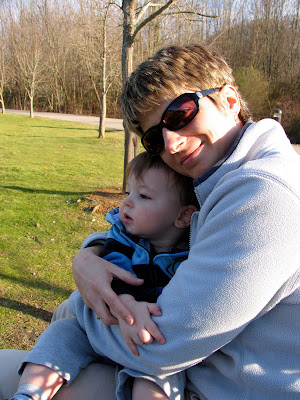 Jack's first turn in a swing! 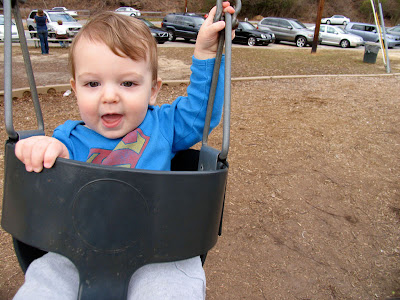 Wearing the world's most accurate tee-shirt 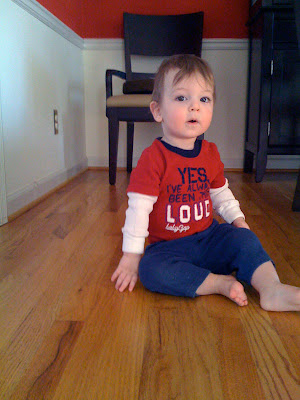 Jack, dressed and ready for St. Patrick's day
He ate Cheerios off the bar top and woo'd the ladies with his rockin' cap 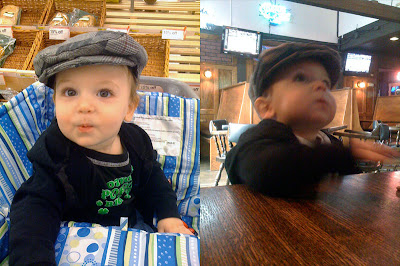 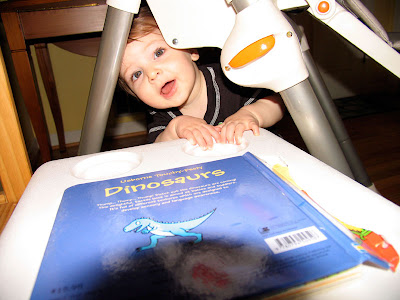 Takin' a bath in the kitchen sink
Don't look! 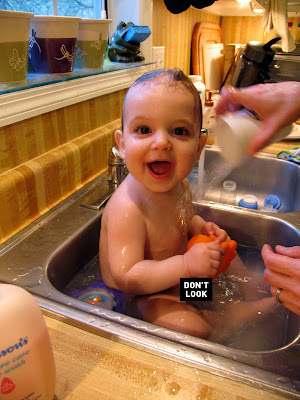 Jack, in his natural yelling state 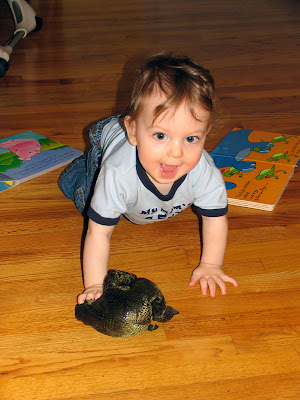 Jack, making a ton of noise with the broiler pan
Since it's the only unsecured drawer in the kitchen, it must have the best unsecured toys! 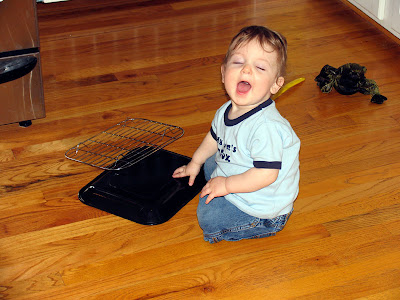 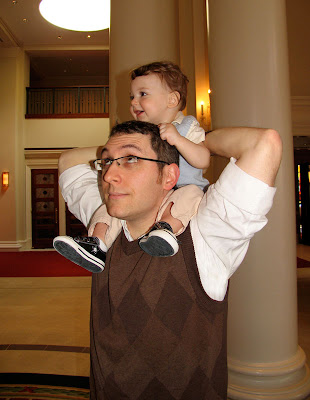 Uncle Fleming and the 'lil sir stylin' it up 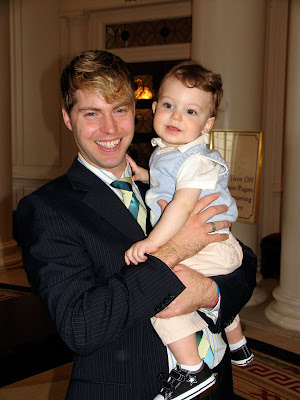 Ann and Jack distracted by something shiny 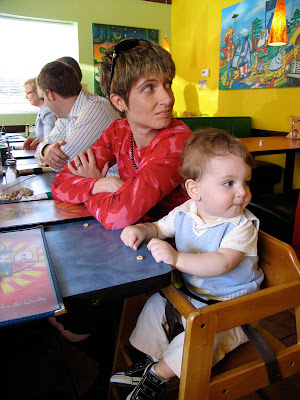 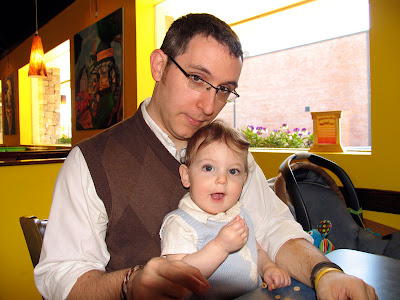 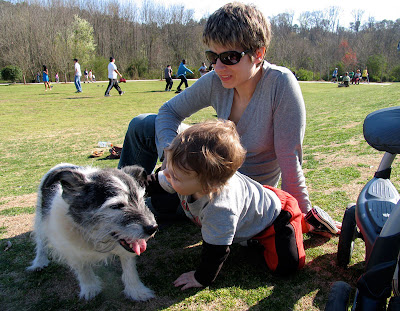 Jack at his first haircut
...wearing the world's longest cape 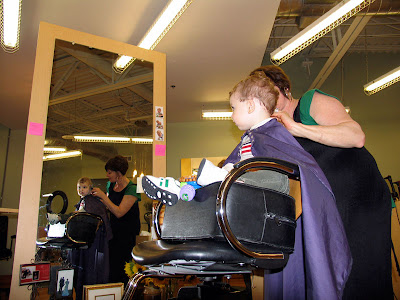 The kid cleans up good! 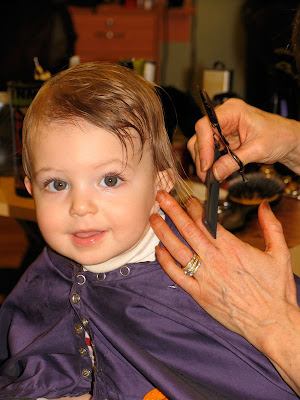